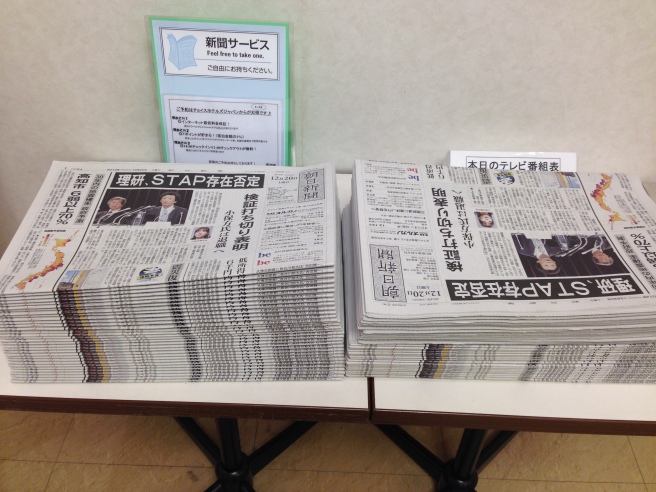 [Copies of major newspapers are given away for free at hundreds of hotels in Japan. Some sales people say these newspapers have “no value.”]
Decades-old media scandal pressed at Japanese parliament, court
By Takehiko Kambayashi, dpa

Tokyo (dpa) – A lawmaker in the Japanese parliament recently grilled government officials over an ongoing newspaper fraud scandal that could rock the country’s media industry.

But the potentially explosive issue has barely been reported in Japanese newspapers. Critics say that is because the scandal involves many of these media outlets themselves.

Shimizu said he visited one distribution outlet for major newspaper Asahi and learned that the distributor, which sells around 1,300 copies daily, was forced to buy 2,000 copies, including 700 extra copies called “oshigami” or “pushed papers.”

In April 2015, internet news portal My News Japan also reported that Asahi had allegedly inflated its daily circulation numbers by 28 per cent for fiscal 2014, citing an internal memo.

Asahi has repeatedly declined to comment on the report.

“However, as newspaper companies have taken advantage of their dominant bargaining position, there has been a mechanism which prevents distributors from pressing charges against them,” he said.

Shimizu added that if a newspaper company notices that a distributor is talking to a lawyer or a lawmaker over pushed papers, it could even drive the distributor out of business.

The lawmaker said one such outlet manager was recently on the verge of losing his business on the south-western island of Kyushu. Saga Newspaper was trying to shut down his outlet after he refused to continue buying extra copies from the paper.

In late March, the Saga district court sided with the manager, ordering the paper to maintain the contract until March 2018.

At the committee, Shimizu also presented other cases of pushed papers involving major dailies such as Yomiuri and Nikkei, which acquired Britain’s Financial Times in 2015.

Many outlet managers have said they do not trust the commission because it has seldom taken action against newspapers.

Shimizu was the first lawmaker in more than three decades to bring up the newspaper circulation scandal in parliament. Some lawmakers did so in the 1980s, but there were virtually no media reports about the issue then.

His pressing the issue in parliament was “significant especially at a time when more outlet managers spoke out about pushed papers,” said Tetsuya Kuroyabu, an author and freelance journalist who has been covering the issue for two decades.

But there have been virtually no reports about the scandal from Japan’s major media since Shimizu’s questions in parliament.

Kuroyabu said newspapers have long engaged in such coercive sales practices to exert political influence and maintain the value of their advertising space.

As of 2002, major daily Mainichi had exaggerated circulation figures by 36 per cent, Kuroyabu said, citing an internal memo at the paper.

Coercive sales practices existed as early as 1930, according to a 1979 book published by the Japan Newspaper Sales Association.

Newspaper readership has steadily declined in Japan due to the country’s protracted economic downturn, growing environmental consciousness and an increasing reliance on the internet, especially on smart phones and tablet computers, analysts said.

Instead of going through restructuring, newspaper executives and editors have ingratiated themselves with political and business leaders, critics say.

Since Prime Minister Shinzo Abe took office, he has dined with media executives, editors and reporters on more than 90 occasions.

Minoru Morita, a veteran political analyst, said he has seen “very corrupt” relations between Abe and the mainstream media.

Abe’s government has not taken any action against the newspaper industry since Shimizu pressed the circulation scandal in parliament in mid-April for the second time.

One media executive blamed Japanese business leaders for failing to question the newspapers about their alleged fraud.

“Everybody knows that newspapers have fudged circulation numbers,” said the executive, who declined to be named. “But companies do not say anything. I cannot believe it.”

(The end of the dpa story)

In January 2012, then-Asahi newspaper president Kotaro Akiyama, who also served as chairman of the Japan Newspaper Publishers and Editors Association from 2011 to 2013, said that the daily would “compete on real figures, not on ABC figures, in a battle with rival newspaper Yomiuri Shimbun.”

Asahi declined to comment on what Akiyama had meant.

View all posts by takehikok